Qenqo is a mixing of an archaeological and natural boulding site located east of Sacsayhuaman at a 3600 meters above sea level altitude (11800 feet) located on a protrusion of the yunkaypata limestone formation site that was shaped in the cretaceous age about 80 million years ago, limestone is a sedimentary rock of marine origin located here as a consequence of Cusco Valley being in the past the bank of a huge lake named morkill which by the east reached as far as angostura, which is place located about 12km far from Cusco city, the rock surface is very irregular in this place and it is known as a karstic landscape which is shaped due to the water dissolution of calcium of calcium carbonate concentrations contained in the rock.

The original name of this site is unknown because the current name qenqo seems to be used since XIX century, “”Qenqo” is a quechua word that means “labyrinth”, “”twisted” or “zigzag” fashion place. It is thought that it must be one of the 365 worshipping places that existed in Cusco Valley. Important places in this site are the “plaza” or the open air space which many researchers call “the amphitheater” which probably was used to carry out several ceremonies to honor some idols and mummies which were probably set in the 19 trapezoidal niches located surrounding the plaza which are partially destroyed at present time. Those niches were high enough to let a person stand up inside that is why it is hinted that they also were used to keep the wayky or the brother of the noble people, which were the human shaped idols built in natural size made of precious metals that according to local belief contained the spirits of those symbolized people. Across from those niches there is an enormous piece of rock shaped after a kind of pole because it is placed in an upright fashion which is thought to be sacred and because due to its location must have had a special meaning. The base of that huge piece of stone is made of carved stone in which two rows are missing. Some researchers hint that old times this rock was an impressive sculpture symbolizing the inka gods perhaps shaping after a feline animal or a snake head but as it was god symbol for the quechuas, it was probably broken and deformed by the spaniard invaders for the supposed purpose of carrying out their “Idolatries Extirpation Duty” by which work they supposedly were destroying everything opposing christianity beliefs so having any relationship with incas religion some audacious people do not hesitate stating that this sculpture was a phallic symbol or male virility symbol.

To the plaza northeast side there are remains of one liturgical fountain which in inca times contained abundant and good water. Unfortunately at present time it is dry and semi demolished. The water spring in this place was recently channeled to take that water to the Cusqueña brewery factory, which company boasts of producing beer made of inkas water.

On the top of the rock protrusion there are several other carved areas which surely were used as base for other buildings that were demolished in the past. There are many steps or staircases carved in the natural rock, remains of zoomorphic sculptures specially those of a bird and a four legged animal maybe a feline. There is also a very interesting phaqcha which means a water fountain made up of a stone bowl on which upper side a zigzagging small channel is branched into two ones which go towards its lower end. It is hinted that this device served in order to carry out religious rituals. So in its upper cupshaped part, the priests probably poured liquids that could be “Aqha” or beer made of corn or perhaps blood of animals sacrified inside the semiunderground chamber to get the liquid flow through the zigzagging channel and then to keep flowing through one of those two branches which direction probably showed different or opposing meanings perhaps showing good or bad luck for the future. Thus the priests could foresee and foretell diverse happenings in the future. It seems that the current name of this place derives from this zigzagging fashioned channel. Crowning the top of the limestone formation there are two carved cylindrical upright protrutions over an ovoid shaped pedestal known as the intiwatana or Sunfastener of Qenqo which supposedly was used as a solar acitivity observatory system and measurement tool along with some other components so it is throught that the intiwatana was used for the purpose to measure the several variations of the sun activity to so set the solstices and equinoxes on record and to so esteem the seasons arrival time.etc All this work was pointed to know what decisions were fit to make for the year oncoming farming activities. It is surprising noticing that the two transversal sides of those two upright shapes point to exactly the magnetic north which can be easily proved using a compass and something similar can be seen in machu picchu thence it is probable that Incas also knew geographic directions because lots of clues of this knowledge are found at present time. Nowadays it is also possible to read or to listen to non-formal stories telling that originally those two upright shapes were used for checking the girls virginity. According to this belief it is told that the girls were kept standing up over the carvings to then be forced to make pee on them so if they did it right into the small carved groove which is placed by the middle it was a sign that the girl wasn’t. Here it is neessary warning that people very often and all the time create funny stories and theories that without any doubt are just a product of their over active imagination.

In the lower east part of the huge boulder there is a narrow passage carved on its lateral surfaces following the natural rock fault and even lower in a kind of a semi underground level the so called “sacrificial chamber” is located which was also carved taking advantage of a small naturally shaped cave. Inside the cave eastward there is a trapezoidal shaped niche surely used in order to keep goods and tools for performing sacrifices. Westward of the cave, there is a carved opening in the rock as a kind of window facing the narrow passage opened surely for the purpose to get some more light insidethe dark cave. In the central part of the cave, there is a sacrificial stone altar where perhaps animal sacrifices must have been done divination or ceremonial purposes. Human sacrifices were seldom performed in the Inca society too that is why for example during the inti raymi ceremony which was the most important ceremony in the year festivity Inca calendar a llama was sacrificed.

Southwestward fo this sanctuary there is another spheroid shaped place known as qenqo chico or smaller qenqo. Both site apparently had a very close relationship. Qenqo chico is surrounded by a “cellular” type built wall which must have higher in old times. Inside it there are some stairways aqueducts, niches and some other components which probably had some religious use. 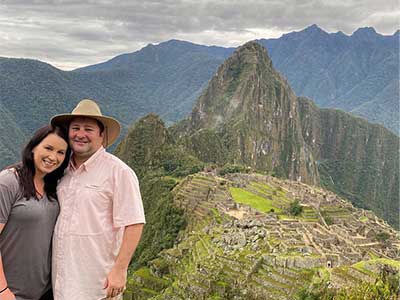 Enjoy a comfortable day full of energy in the citadel of Machu Picchu, we will…